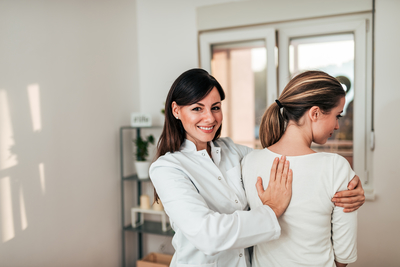 Spinal decompression is a treatment option provided by a Doctor of Chiropractic for several different reasons. However, it’s quickly becoming a favorite treatment option for those seeking out herniated disc treatment.

The human spine is made up of 33 individual vertebrae, each with a rubbery cushion (or discs) between the bones. When these discs start to move out of place, they are referred to as herniated discs, slipped discs, and/or ruptured discs.

A herniated disc typically refers to a disc that has ruptured its outer layer and its jelly-like layer has started to push through the tougher outer layer, causing pain.

Spinal decompression is an effective herniated disc treatment method because the process involves stretching the muscles of the back and helping them to relax back into their natural positioning. This process helps to relieve a patient’s pain because it takes the pressure off of the disc and often helps it to slip back into its intended place.

While many individuals believe that bulging discs and herniated discs are the same, they are two very different conditions. Where herniated discs have a crack in the outer layer of cartilage and involve some of the inner, soft cartilage to protrude out, a bulging disc refers to only a small portion of the disk and an irregular outer circumference that causes the entire disc to protrude out of its normal shape.

Need help visualizing the difference? Think of it this way:

That said, spinal decompression works very well as a form of bulging disc treatment because it still helps to relieve any pressure that may be placed on the disk since it’s not sitting in its correct place.

Herniated disk treatment should never be taken lightly. Instead of masking the associated pain, give Northgate Chiropractic Clinic a chance to treat it at its source.

If you require herniated disc treatment, then schedule a consultation online or by calling our office at (507)285-1677. Paint shouldn’t become a regular part of your life, schedule an appointment today.

Why UsYour First VisitMeet The Doctor